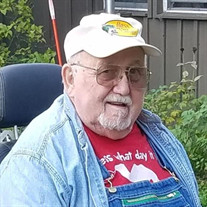 Allen Arland Oswald, 82, of Alburtis, passed away peacefully January 30, 2021 in Lehigh Valley Hospital. He was the husband of Jean (Sell) Oswald. They would have celebrated 64 years of marriage on March 23. Born in his childhood home in Alburtis, he was a son of the late Erwin F. and Naomi A (George) Oswald. Allen was a 1956 graduate of Emmaus High School and worked for the Buckeye Pipe Line Co., starting out as an apprentice draftsman soon after graduation, and retiring as the Lead Records Specialist in 1996. Allen was a member of Longswamp United Church of Christ, Mertztown, formerly serving on the consistory and was the financial secretary. Deeply involved in his community, Allen held numerous positions throughout the years. He was a previous secretary for the Alburtis Recreation Association, vice-president and construction chairman for the Alburtis Area Swimming Pool, Cubmaster of Alburtis Pack 86 and later Committee Chairman, served as a member of Alburtis Borough Council for eight years before serving as vice-president for one year and president for six years, charter president of Alburtis-Lockridge Historical Society and served as president for over eighteen years, member of Alburtis Rod & Gun Club and life member of Nimrod Fish & Wildlife Association, Alburtis. A history buff, Allen did extensive research on the history of Alburtis and was always called upon whenever questions about Alburtis arose. He wrote numerous publications on Alburtis history. An avid genealogist, Allen spent many years doing extensive research on his family tree along with his wife’s family. For the past 22 years, Allen spent half of each year at his summer home in Susquehanna County, where he enjoyed fishing, hunting, gardening, and spending time with family. Survivors: In addition to his wife, Allen is survived by his children, Allen II, and his wife, Catherine, of Friendsville, Susquehanna County; Matthew, and his wife, Abigail, of Alburtis; daughter, Ellen, and her husband Sterling Quier, of Green Valley, AZ; sister, Ann Marie Riegel of Orwigsburg; grandsons: Ryan (Lindsay), Allen III (Valerie), Scott Quier, Kevin (Christine) Quier; granddaughter: Aubree; great grandchildren James, Shaun, Delia Quier, Alexis Quier, Olivia Quier; granddogs: Zena, Auttie, Harley, Lulu, Ben, Sunday, Hercules, Teddy, and Ace. He was preceded in death by his brother, Donald G. Oswald. Services will be private. In lieu of flowers, contributions in Allen’s name can be made to: Macungie Ambulance Corps, PO Box 114, Macungie, PA 18062-0114.

Allen Arland Oswald, 82, of Alburtis, passed away peacefully January 30, 2021 in Lehigh Valley Hospital. He was the husband of Jean (Sell) Oswald. They would have celebrated 64 years of marriage on March 23. Born in his childhood home in Alburtis,... View Obituary & Service Information

The family of Allen Arland Oswald created this Life Tributes page to make it easy to share your memories.

Send flowers to the Oswald family.