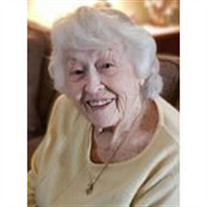 Ardeth Burgess Weston Schlauch (90), went to be with the Lord on May 28, 2019, surrounded by her adoring family, in the home that she loved. Ardeth was born in East Orange, New Jersey. Her parents were Mildred Ardeth Burgess and Paul Spurgeon Weston. She was a graduate of South Whitehall High School. She earned a BS in Business Administration from Cedar Crest College in 1950. Ardy taught high school business classes before embracing her true career -- marriage and motherhood, in which she excelled. She met the love of her life, Richard Ginder Schlauch at church when she was 10 years old and he was 12, and she knew that she had met the boy she wanted to marry. \"He was my boyfriend, as long as I can remember\", she would say. They married in 1950, once they both finished college. Even at the age of 90, she would describe that first year of marriage as the happiest time in her entire life. In October 1961, she and her husband moved into their new home in Breinigsville, PA. It is here that she raised 5 children and weathered the storms of life. She treasured her beautiful home and large yard dearly. She lived through four wars, two of which her husband served in -- World War II and Korea, and she flew an American flag in her front yard until her death. In her youth, Ardy enjoyed summers visiting her grandparents in Glendale, West Virginia and skating on the frozen Jordan River in Greenawalds, Pennsylvania. She worked at a bookstore and could tell you where any book was located in the store. Later in life, she became a lover of history, genealogy, and a serious Jeopardy fan. Her sharp memory proved quite useful in those pursuits. She enjoyed traveling, and explored most of the United States, as well as Europe, India, and Egypt. Her fondest times were enjoying hot summer days at her pool with her 5 children, 9 grand children and 11 great-grandchildren, as well as taking slow rides around Lehigh County and West Virginia, telling her family stories of a time long since gone. Since the age of 8, she began attending church, often times walking there alone. Her faith and persistence inspired her parents, who began attending church and would do so for the rest of their lives. Throughout her life, she had been a member of the Evangelical and Reformed Church in Greenawalds, the Episcopal Church of the Mediator in Allentown, St. Stephen\'s Episcopal Church of Whitehall, and St. Paul\'s Anglican Church in Allentown, where she was a faithful member until death. She is predeceased by her husband Richard and their daughter Nancy Selitto. Her children are Deborah Heiser, wife of Roger Heiser of Manheim, Pennsylvania; Cynthia Hersh, wife of Richard C. Hersh, Jr. of Ashburn, Virginia; Ardeth Ann Schopf, wife of Robert L. Schopf of Breinigsville, PA; and Richard W. Schlauch, husband of Margaret Denuel of Breinigsville, PA. Her grandchildren are Elizabeth Velkly, Richard C. Hersh III, Matthew Heiser, Robert W. Schopf, Andrew Schopf, Elizabeth Hritz, Sarah Schopf, Margaret Carpenter, and Richard Ginder Weston Schlauch. She is also survived by her 11 great grandchildren. A funeral will be held on Saturday, June 1, 2019 at 2:00PM at St. Paul's Anglican Church, Allentown, Pennsylvania with the Rev. Joseph Falzone presiding. In lieu of flowers, contributions may be made payable to St. Paul\'s Anglican Church, Allentown, PA.

Ardeth Burgess Weston Schlauch (90), went to be with the Lord on May 28, 2019, surrounded by her adoring family, in the home that she loved. Ardeth was born in East Orange, New Jersey. Her parents were Mildred Ardeth Burgess and Paul Spurgeon... View Obituary & Service Information

The family of Ardeth Schlauch created this Life Tributes page to make it easy to share your memories.

Ardeth Burgess Weston Schlauch (90), went to be with the Lord...

Send flowers to the Schlauch family.