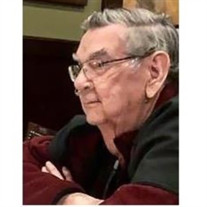 David Hogancamp, 81, of Salisbury Township died on December 11, 2021, of emphysema at home surrounded by his loving family. In July he celebrated his 58th wedding anniversary with his wife Sandra Ann (Mohr). Born in Elmira, NY, he was the son of the late Richard D. Hogancamp and Philoma A. (Seely). Dave received a B.S. from Mansfield University and a Masters degree from Elmira College. He began his career as a math teacher in Elmira at Parley Coburn Jr. High and was described as demanding but fair by former students. He ultimately became a labor relations specialist for the National Education Association (NEA) where he fought tirelessly to improve the working conditions for teachers in 15 school districts. He retired from that position in 2002 and moved to the Lehigh Valley in 2018 to be closer to his grandchildren. Dave was an avid outdoorsman that enjoyed hunting and fishing. A visit to his garage might be a chance to encounter a deer being processed or fish from a trip to Canada being prepped for dinner. Although it is believed he could not carry a tune in a basket, he took immense pleasure in attending the musical performances of both his daughters and grandchildren. He relished watching the achievements of his grandchildren, especially when they mastered “The Quiet Game.” He had a dry wit, was fond of antiques, and wrote poetry. Dave was a staunch proponent of public education even after he retired. An avid reader, it was rare that there was not a book within reach. He loved watching birds and animals, especially horses. A very loyal friend, he and Sandy were a fixture at New York’s Southern Tier dining establishments, meeting every Friday for more than 3 decades with the Mansfield University chapter of the Crumbly Blue Cheese Dining Society. He was a long-serving member of the Board of Directors of the Chemung County School District Federal Credit Union, as well as a member of the Pine Crest Hunting Camp and various conservation and wildlife organizations. In addition to his wife, he is survived by two daughters, Rebecca Ann Glenister (husband Michael) of Allentown, PA, and Rachel Kay Hogancamp (partner Ellen Abrams) of Ithaca, NY; two siblings, Sandra Rivers of Haines City, FL, and Theodore Hogancamp (wife Ernestine) of Rochester, NY; two grandchildren, Jacob Robert Mohr Glenister and Aaron David Mohr Glenister; as well as several nieces and nephews. He was predeceased by his sister Patricia Brant and nephew Gerald Brant. A memorial service will be held at a future date to be determined by the family. In lieu of flowers, donations may be made to Bayada Hospice, 1 West Philadelphia Ave, 4th Floor, Boyertown, PA 19512, or a conservation charity of your choice.

David Hogancamp, 81, of Salisbury Township died on December 11, 2021, of emphysema at home surrounded by his loving family. In July he celebrated his 58th wedding anniversary with his wife Sandra Ann (Mohr). Born in Elmira, NY, he was the son... View Obituary & Service Information

The family of David Hogancamp created this Life Tributes page to make it easy to share your memories.

Send flowers to the Hogancamp family.