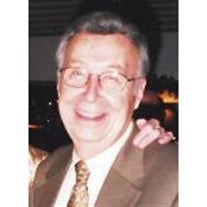 Kenneth E. Strohl, 91, of Fogelsville, passed away October 19th in his home under the care of his family, following a courageous battle with cancer. A loving and devoted husband, father, and family man, he actually did marry the girl next door, his high school sweetheart, Jean L. Shaffer, who passed away in 2011. They had celebrated 62 years of marriage, 3 sons, 2 daughters-in-law, 6 grandchildren and 4 grandchildren-in-laws, and 2 great-grandchildren. He was lovingly called 'Pappy' by all. A graduate of Allentown High School, class of '45, he attended Ursinus College before enlisting in the Army during WWII. He returned to spend his entire career in the family business, Stanley A. Strohl Chevrolet. Over a span of 55 years he worked/partnered with his father Stanley, his brothers Marvin, Roderick, and Victor, his sons, all 6 of his grandchildren, many nieces and nephews and other family members. He was a graduate of Chevrolet Dealer Sons' School of Merchandise and Management. Born and raised in Fogelsville, he was a son of the late Stanley A. and Pearl I. (Freas) Strohl. He was proud of his Pennsylvania Dutch heritage. Kenneth was a member of both St. John's UCC and St. John's Lutheran Churches in Fogelsville. He enjoyed singing with the church choir, Summer Harmony, and Zion Choral Society. Always the gracious host, his backyard 'Club Strohl' became a popular spot for 3 generations, especially for his grandchildren, their cousins and friends. He was a Mason and was a member of numerous other organizations, including Merchants Bank Western Region Advisory Board and Parkland School District Authority. Surviving are sons Douglas K. and his wife, Mary Ellen, Tom A. and his wife, Beth, and Ted B.; grandchildren Daniel and his wife, Kate, Sarah, Cassie, Jonathan and his wife, Ashton, David and his wife, Lauren, and Jenny and her husband, Reid; great-grandchildren Grace and Julian; and brother Roderick and his wife, Dorothy. He was predeceased by sisters Mildred and Lorraine and brothers Marvin and Victor. Memorial service 11:00 a.m. Saturday, November 3rd in St. John's U.C.C., 1027 Church St., Fogelsville. The family will receive relatives and friends from 10:15 to time of service. Interment with military honors will conclude services in adjoining Fogelsville Union Cemetery. Contributions may be made to St. John's UCC, P. O. Box 817, Fogelsville 18051.

Kenneth E. Strohl, 91, of Fogelsville, passed away October 19th in his home under the care of his family, following a courageous battle with cancer. A loving and devoted husband, father, and family man, he actually did marry the girl next door,... View Obituary & Service Information

The family of Kenneth E. Strohl created this Life Tributes page to make it easy to share your memories.

Send flowers to the Strohl family.