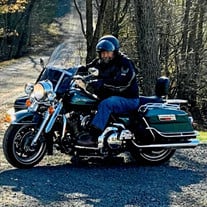 Kenneth K. Kain, 80, of Breinigsville, passed away Tuesday, December 15, 2020 at Lehigh Valley Hospital, leaving behind his devoted family, his wife of 56 years, Linda, sons, Scott, Kevin and his wife Josette, and Dean. Kenneth’s brothers are Ronald and his wife, Carole, of Florida, Denny and his wife, Roxanne of Harrisburg. Kenneth was born December 8, 1940 in Yellow Run, Susquehanna County, to Carl and Katherine Kain. Kenneth, along with his wife, Linda, owned and operated the Peter Pan Diner in Kuhnsville from 1978 until 1989, then retiring until they decided to purchase and operate the Inn at Springside in Kutztown from 1997 until 2007, and then retiring again. Throughout his life, Kenneth was an avid motorcyclist and car enthusiast. As Kenny’s wishes, there will be no viewing or services.

The family of Kenneth K. Kain created this Life Tributes page to make it easy to share your memories.

Send flowers to the Kain family.