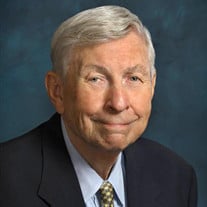 Leon S. Peters was born and raised in Fogelsville during the depths of the Great Depression on February 9, 1931 and passed away following a brief illness on December 4, 2021 at the age of 90. He was the son of Ralph and Verna (Dengler) Peters. He graduated with the class of 1949 from Allentown High School as a member of the National Honor Society. Plans to attend Muhlenberg College changed due to the sudden death of his brother, LeRoy, from Polio. Leon’s family had owned and operated a grocery and meat market employing five people, but sold it following LeRoy’s death. Facing the draft for the Korean Conflict, Leon Joined the U.S. Army Security Agency, and was stationed at the Wildwood base in Kenai Alaska, with a mission to intercept Russian Messages. Having fulfilled his military obligation, Leon was discharged in 1955, returning to Fogelsville. He was recruited by the Prudential Insurance Company as a sales agent, and was ultimately promoted to staff manager. In 1968, Leon was recruited by Warren W. York & Company, where he specialized in bank stock sales, municipal bond underwritings, and the sale of tax-free bonds. When Warren York was sold in 1987 to Legg Mason, then-president Chip Mason asked Leon to stay on for a two-year period, which turned into twenty years. Legg Mason was ultimately sold to Morgan Stanley from which Leon retired in 2010 with 40 years in the brokerage business and a multitude of satisfied clients. Leon always believed in giving back to the community. He spent six years on the Parkland School Board and fifteen years as a founding trustee of Lehigh County Community College. He was a passionate advocate for introducing young people to affordable higher education. He also served as a board member for the Center for Vision Loss for over 40 years. Leon has been a member of the Lehigh County Assessment Appeals board for 18 years and has been a director of the Lehigh County Agricultural Society for over 35 years, having served the previous four years as its Board Treasurer, and most recently as the President of the Board. He was a driving force behind the creation of the Great Allentown Fair Foundation, which grants scholarships to deserving students and has also raised funds to renovate and illuminate the cupola atop the fairgrounds grandstand. His past and present community activities have centered primarily within Lehigh County. His proudest moment was when LCCC opened its doors to serve students who wanted further education toward a two-year associates degree. Many of those students continued on to earn baccalaureate and advanced degrees at other educational institutions and who became productive members of society. Leon was deeply involved in convincing the nine participating school boards that community college would be of benefit to the community at large. Survivors: Leon leaves behind a wife, Barbara Bigelow, whom he met in September 1990 on her second day in office at the city of Allentown. They married in 2000. Son, Noel, married to Alice (Balliet) and a grandson, Austin Peters and his companion Melissa Piccinich. Memorial Service: 11:00 Monday, December 13 at St. John’s UCC, 1027 Church Street, Fogelsville. Calling hour will begin at 10:00 AM. Contributions: In lieu of flowers, donations can be made to St. John’s UCC or the Great Allentown Fair Foundation c/o the funeral home, P.O. box 190 Breinigsville, 18031.

Leon S. Peters was born and raised in Fogelsville during the depths of the Great Depression on February 9, 1931 and passed away following a brief illness on December 4, 2021 at the age of 90. He was the son of Ralph and Verna (Dengler) Peters.... View Obituary & Service Information

The family of Leon S. Peters created this Life Tributes page to make it easy to share your memories.

Leon S. Peters was born and raised in Fogelsville during the...

Send flowers to the Peters family.