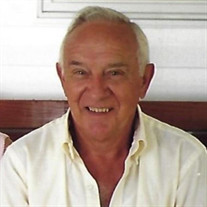 Richard Harry “Dick” Butz, 87, of East Texas passed away on Saturday, April 25, 2020 at the Hospice Unit at L.V. Hospital. His wife and boys were with him. He was born in East Macungie, to Russell and Ellen (Eisenhard) Butz on May 21, 1932. Dick lived in East Texas, went to the 2 room school house for 8 grades, then went to Emmaus High School and graduated in 1950. While in high school, he was in the band and served as a stage hand. While in grade school, he worked in Butz Bros Store doing stock and delivery. He then worked at Rotary Clothes and Dryers and parking cars at Dorney Park. After graduation, he worked for Macungie Silk. In June 1952, he married Mary E. (Ross) and in December 1952 was drafted and served 2 years in the Army stateside. He came out of the Army as Corporal. After the Army, he went to work at the Trojan Powder Co for 2 years. In 1957, he moved to Ft. Pierce, FL. There he was a supervisor for Dandee Bakery after 4 ½ years. After moving back to PA, he went back to his old job at Trojan Powder Co for 33 years. He also drove school bus for Leibensperger for many years. He was a longtime member of Krocksville Sunday School and served as trustee and treasurer. After retirement, he traveled and did yard work, fishing, crossword puzzles and dining out with family and friends. He was also a member of the Lower Macungie Historical Society and Lehigh Co. Agricultural Society. Survivors: wife Mary of 68 years, 5 sons Richard G and wife Jane, John and wife Katherine, David, Steve and wife Lynn, Michael and wife Molly. There are 8 grandchildren, 5 great grandchildren, 2 sisters Barbara Thompson of FL, Mary Kocis of Emmaus, 3 brothers Donald of Allentown, James of California, Timothy of Allentown, nieces and nephews. He was predeceased by two brothers Gerald and Gene. Service: Private Service, May 1, at TREXLER Funeral Home. Burial at East Texas Cemetery. In lieu of flowers, contributions in Dicks’ name can be made to the Allentown Rescue Mission.

Richard Harry &#8220;Dick&#8221; Butz, 87, of East Texas passed away on Saturday, April 25, 2020 at the Hospice Unit at L.V. Hospital. His wife and boys were with him. He was born in East Macungie, to Russell and Ellen (Eisenhard) Butz on... View Obituary & Service Information

The family of Richard Harry "Dick" Butz created this Life Tributes page to make it easy to share your memories.

Send flowers to the Butz family.