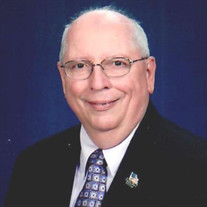 Richard A. Miller, 82, formerly of Macungie, passed away Monday, March 7, 2022 at the Phoebe Home, Allentown. He was the husband of Nancy J. (Semmel) Miller, with whom he shared over 56 years of marriage. Richard was born and raised in the heart of Wescosville, PA on October 7, 1939 to the late Austin and Florence (Kuhns) Miller. After graduating in 1958, from at that time, the new Emmaus High School, he later completed his education at Muhlenberg College and Bethlehem Business School. In 1962, Richard enlisted in the US Army Reserve until 1968, when he received an honorable discharge from the US Army with the rank of sergeant. He served with HHC, 6 BN, 68 Armor. Richard had three brothers all who served their country honorably: William Henry Miller served in the US Army, Albert Noah Miller served in the Navy, and Robert Charles Franklin Miller who served in the Marine Corps. After completing his education, Richard joined the Union Bank of Eastern PA in their management-training program with initial assignments in internal auditing and mortgage accounting. On August 20, 1965, Richard terminated employment with the bank, on August 21, 1965, Nancy and Richard were married and on Tuesday, August 24, 1965 he started with the East Penn School District. Richard's initial employment with the district was as Assistant to the Business Manager and Treasurer, and in 1975, was promoted to Business Manager, lastly holding the title as Director of Business and Fiscal Affairs and Treasurer. He held that position until retiring on December 31, 1999. Richard was active in Rotary for several years after retiring. In 1969, Richard and Nancy joined St. John's UCC, Emmaus, where he served as Deacon and Elder into the year 2016. During that time, he served on Consistory for over 35 years as well chaired many church committees. Survivors: Wife Nancy; sons Daniel R. and his wife Debbie of Macungie; Thomas S. and his wife Doris of Stroudsburg; 6 grandchildren. He was predeceased by his brothers William, Albert and Robert. Services: 10:30 AM, Friday, March 11, at St. John’s U.C.C., 139 N. 4th St. Emmaus. Calling will begin at 9:30 AM. Burial with military honors at St. Paul’s Cemetery, Trexlertown. Memorials can be considered to the church building fund or memorial fund.

Richard A. Miller, 82, formerly of Macungie, passed away Monday, March 7, 2022 at the Phoebe Home, Allentown. He was the husband of Nancy J. (Semmel) Miller, with whom he shared over 56 years of marriage. Richard was born and raised in the heart... View Obituary & Service Information

The family of Richard A. Miller created this Life Tributes page to make it easy to share your memories.

Richard A. Miller, 82, formerly of Macungie, passed away Monday,...

Send flowers to the Miller family.